How To Write A Long Academic Expository Essay 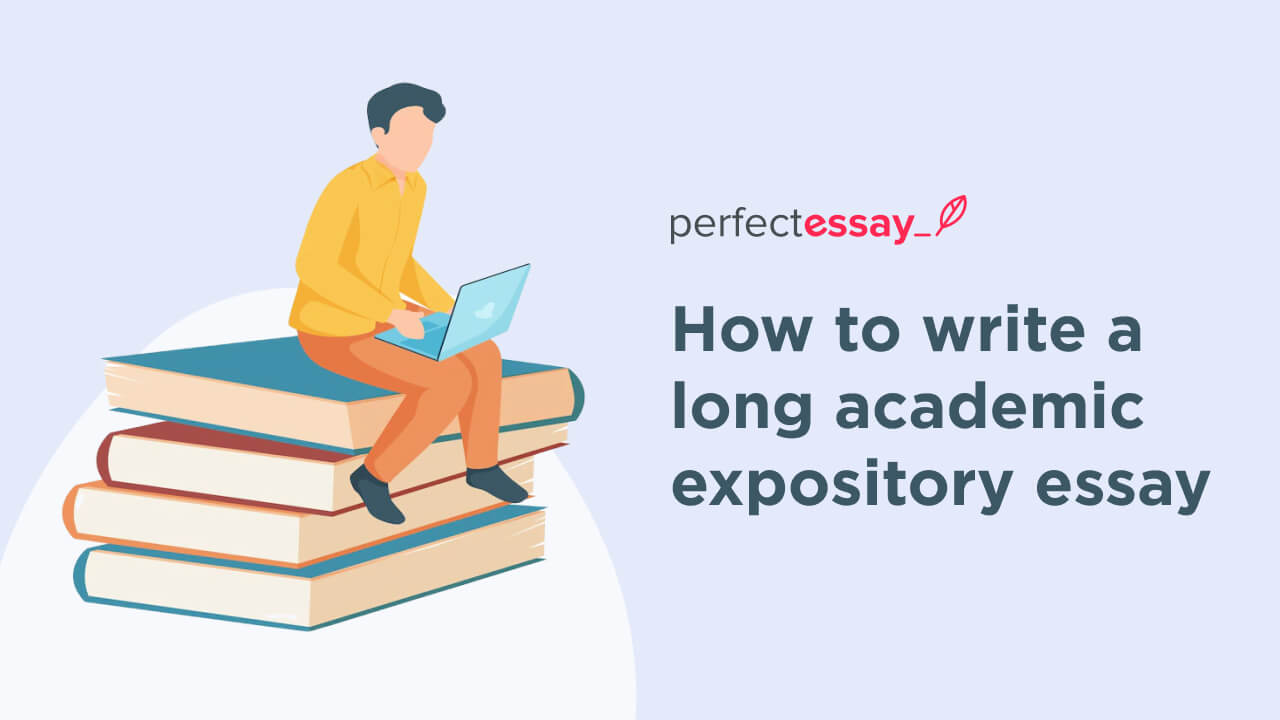 The learning path never ends, especially when you are in school or college. There is a compulsion to do better than your peers to stand out from the crowd. The fruits of literary labor do not end there as the skills learned even through compulsion equip students to become better professionals tomorrow.

Expository writing baffles students but mastering its art and craft can open new avenues for success. There was a lack of a reliable resource for students where they could learn the dynamics of expository writing. This blog post will bridge this gap by providing a simple guide to long academic expository essays as well as their different approaches.

An expository essay is the simplest to define but the hardest to master. In a nutshell, an expository essay provides informational and actionable information to the readers. There is no ornamentation and subjective perspective to the subject as writers only rely on facts and figures.

The hallmarks of expository essays include neutral language and tone, an objective approach toward the subject, and organized information. Writers can only shine through the soundness of their arguments alone because there is no room for novel prose and expression.

Students may not get a detailed account as to which approach they need to follow for their expository essays. This is where this section helps them in identifying the types and learning the ropes.

If the name is any indication, these essays go through the steps of a process to help readers understand it. It can be about changing the oil in a car engine or a confection recipe. These essays aim to provide a detailed account, including the preliminaries, the essentials, and the cautions. Process essays are commonly in manuals and how-to articles as well as scientific papers. Each body paragraph will cover a major milestone until the process is done.

Classification essays may sound tricky but they are rather simple and basic. They deal with the classification of the subject under consideration based on its traits and characteristics. The best way to illuminate the subject’s class is by comparing it with similar things as references as well as contrasting it with the things that differ from it completely. This will paint an unambiguous picture for the readers as they navigate through the similarities and differences of the references concerning the subject.

Cause And Effect Essays

Cause-and-effect essays are one of the most complicated approaches to writing expository essays. They require a lot of research to determine the causes and effects of phenomena and developments. In many cases, they are similar to action and reaction studies because writers need to trace the chain of events connecting one happening or incident to the other. The elements and time-space play a great role in setting the pace and premise of the cause-and-effect essays.

Compare and contrast essays share many traits from other types of expository essays but differ in the most basic one. In this, the writers support these by examining the differences and similarities between the sources of citations and references. For instance, if you want to write a compare and contrast essay on the primary education policies of two districts, you may have to examine the differences and similarities as well as the processes and operations through which those policies come into action.

How To Write An Expository Essay

Even after learning about the expository essay and understanding different approaches to it, it is understandable if students and novice writers want something more practical and concrete. There are many known and unknown variables in how to start an expository essay and how to conclude it on a high note. In this light, we are sharing a simple yet comprehensive guide on how to write long academic expository essays.
Selecting A Topic
Topic selection is the first step toward starting an expository essay. If a student can get this right, the succeeding steps become comparatively easier. Most of the time, instructors provide students with several topics to choose from. When that happens, students should select the topic that interests them and motivates them to research and collect data. Expository essays on obscure topics can be a headache for students in their formative years, so avoid these and go for those that have extensive research on them.
Understanding The Question
Every essay is based on a question, whether it is asked or implied in the title. It is the job of the expository essay writer to understand that question before writing. Sometimes, this question can be a problem or an issue that he may have to find the causes or reasons for. Whatever the case, it is necessary to understand that question and determine its scope before sitting down to write. Otherwise, it could lead to frustration as the progress of the essay will be affected.
Gathering Data
Descriptive essays and narrative essays can be written from start to finish by the sheer powers of imagination and memories. But expository essays can be tough nuts to crack for writers who do not like to gather data. Since there is no room for a subjective approach or commentary on the subject in this type of essay, writers must rely on objective, well-research information to base their essays on. Anything less and it will not be an expository essay but a mere reflection of it.
Creating An Outline
Outlining is an important pre-writing part of the process. It sets the direction and scope of the essay without going through a lot of hit-and-trial episodes. Many writers believe that it can be the demise of creativity, but this is far from it. Many experts suggest that students should conduct research and outline their essays at the same time. This will further streamline the process and ensure that they reach the finishing line sooner rather than later.
Introducing The Essay
What can help readers in getting invested in the text? Apart from the title, it is the opening of the essay. Writers start with the hook to hold the readers’ attention and make them stay with the essay. A hook can be anything; it can be a direct question asked to the readers; it can be a bold or shocking statement; it can be a simple fact related to the topic. Whatever hook students employ, it should be related to the subject and understood by the readers.
Providing Context
After the successful opening, the main body of the essay is still far. So, writers need to use this space to make readers acquainted with the subject matter. They should use the space to provide context and background information as much as they can. This will prepare the readers to understand the main arguments and the evidential data from the body of the expository essay. After clearing the context, the ground becomes ripe for the thesis statement that comes in the closing lines of the introduction.
Composing The Thesis
A thesis statement or simply thesis is an important element of any academic essay. It offers a gist of the whole essay to the readers as well as the writer’s stance on any side of the fence. The thesis statement is written in bold and brief sentences. Mostly, a sentence should suffice, but if students need to write a couple, they should be bold and succinct with no ambiguity in the contents. The thesis bridges the introduction of the expository essay with its main body.
Writing The Body
This is the meat and bones of the expository essay as it is where the action takes place. In a typical essay structure with a total of five paragraphs, the essay body gets three. So each paragraph should be allocated to one argument and its supporting evidence. This makes it clear to the readers the soundness and application of that argument. In contrast to this, block structure covers all the arguments in a single paragraph and then provides evidence for them in the rest.
Closing The Essay
Like the opening lines, the closing paragraph of the expository essay should make an impact on the readers. It is fairly simple to conclude an academic expository essay. Writers do not need to add new elements to the discussion in this section. Rather, they only need to reiterate and summarize the arguments from the body of the essay. One of the ways to make the desired impact in the conclusion is by using one-liners and catchy terms to make it memorable for the readers.

How long is an expository essay?

When do I write an expository essay?

Expository essays are among the most commonly used essays in schools and colleges to gauge the writing, researching, and thinking capabilities of students. It is considered to be harder than other types because it requires a lot of research and presents no room for personal commentary.

What’s the difference between an expository essay and an argumentative essay?

An expository essay provides factual and unadulterated information to the readers in an objective manner and neutral voice. An argumentative essay, on the other hand, can be charged in language and sentimental in approach. The common thing between the two is that they both provide empirical evidence to prove a point.

Can I use emotional language in my expository paragraph?

An expository paragraph or essays are known for their detached and facts-only approach. Writers do not provide comments or suggestions regarding the subject matter but merely facts and figures. So, you cannot use emotional language in expository essays to make a point.

What is the primary motive behind expository writing?

The primary motive behind expository writing is to convey actionable and factual information. There is no room for flowery prose and figurative language. The best expository essays have hard-boiled evenly-stated facts with supporting evidence.

What are some common pitfalls in expository papers?

Here are some common pitfalls that students face while writing expository essays:

Out of all essay types, expository essay writing is considered the hardest by writers. When you are tasked to write a long academic expository essay on a topic, it is natural to be worried but there is no need to panic. In this blog, we have shed ample light on the nature of expository writing, different approaches to expository essays, and how to write one – from start to finish. Each step is clearly explained so students will not have a hard time understanding the individual parts.

We hope that this blog will help readers to secure maximum scores in their essay writing class along with acquiring life-long skills.

Free Features For You

Topic Selection
for $3.09
Credible References
for $2.50
Thesis Development
for $3.99
Plagiarism Check
for $3.50
Get Expository Essay Now!