How To Start An Argumentative Essay 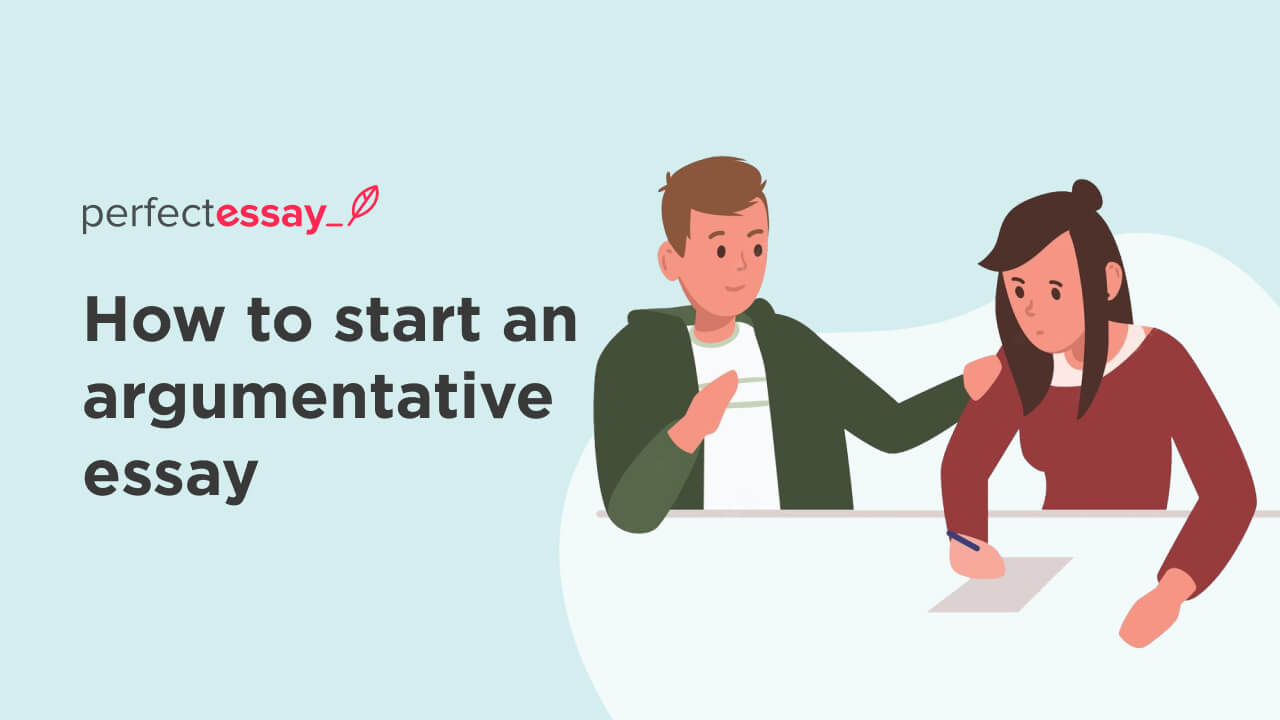 What Is An Argumentative Essay?

An argumentative essay is defined by its purpose – to convince the readers about a certain point of view. In this essay, the writer takes a stance from the beginning and then provides evidence and proof to ensure the reader that the promoted stance is the right one. Another thing that helps argumentative essays stand out from the rest of the essay types is their reliance on facts and evidential information to make a point.

The primary source of proof for argumentative essays is mathematical logic and reasoning. This is evident from the bridging of different sections, including the introduction, the main body, and the conclusion. The secondary sources include references and citations from credible publications and authors.

There are three major types of argumentative essays. Their nature is often explained by their names alone, including research papers, persuasive essays, and analysis papers.

Major Parts of An Argumentative Essay

No matter which way you demystify a piece of writing, there is always a special element to it. The best way to understand it is by gauging the value of all major sections in an essay when they are combined as a whole.

This is where all the action begins. The opening lines of an argumentative essay can be designed to let readers into the fold. The technique is called a hook and it can be a question, a statement, or a statistic. We will discuss them further in the later sections. After a successful opening, it is time to provide background information or context to the readers. In the closing lines of the introduction, writers should put down a thesis statement that is the essence of the main idea or theme of the essay.

Considered the meat and bones of an argumentative essay, the main body covers the major arguments and the supporting argument. Usually, writers divide the citations and proofs into three paragraphs. The approaches to different argument-building techniques and methodologies will come in the later sections. The important thing here for the writers is to make the text as objective and fact-based as possible. The main body transitions into the conclusion so it is best to utilize the space with utmost care and ensure that everything checks against empirical proofs.

As the name suggests, this is the closing paragraph of an argumentative essay. Writers need to reiterate the main arguments and their proofs in a compact form. This helps readers in understanding the scope and depth of the essay as well as makes the main points memorable for them. There are different approaches to concluding an essay but all of them have the same principle – tying up the loose ends. Using one-liners and catchy phrases can also help writers make a point across. Make sure never to add to the original argument in this section.

How To Structure An Argumentative Essay In 4 Steps

After identifying the major parts of an argumentative essay, it is time to go through a simple guide that can help writers and students to connect the dots for themselves. We have divided the task into four simple steps. Three of them involve the major parts of the argumentative essays we covered in the previous section. One is about an essential element of the essay.

Opening Paragraph With A Hook And Context

This is the first problem students face when they need to write an argumentative essay. The opening paragraph needs to make an impact on the readers to make them invested in the essay. The hook lures the readers in by making a grand claim or a statement. After setting a hook, it is best to provide background information or context regarding the core problem or issue of the essay that needs to be addressed. After the context, it is time to present the thesis statement of the essay.

A thesis statement is the distillation of the main idea or theme of the essay. In the case of an argumentative essay, it is the summary of the writer’s stance regarding an argument and its implications. If you are wondering how to write a thesis statement for an argumentative essay, the path is clear. You need to turn the topic into a question, find the answer to the question through research, and then summarize that answer into a single or a couple of sentences.

In a typical five-paragraph argumentative essay, the main body of the essay covers three paragraphs. No matter the approach to develop an argument, writers divide the sections in a way that each of the three-paragraph gets specific issues to handle resulting in a focused or relevant paragraph. This is the only place where writers can address the topic or the question directly. So, it is best to make every word count and ensure that everything is addressed before moving on to the conclusion.

Closing Paragraphs To Tie Up The Discussion

In the closing paragraphs of the essay, the writer can connect the narrative of all the sections in a singular unit. The conclusion is supposed to be self-sufficient and should ensure that everything is tied down to the core. Many students make the mistake of introducing new issues or solutions to the problem. This is inappropriate as it can throw the focus off of the main point and get other things into the mix. Before signing off, make sure that everything worthwhile is covered.

The Best Way To Open Your Argumentative Essay

Starting by asking a question that is directly related to the topic is a great way to grab readers’ attention. There is nothing fancy or complicated in it as you can easily wade through the contents of the introduction after successfully executing the opening. Later, you can answer the question in the introduction or the main body.

A quote from a famous author or a publication can help writers get the due attention of the readers. Again, it is highly dependent on the topic and the problem of the essay. The relevance between quoted material and the contents of the essay further strengthens the arguments and evidence for them.

A statistic is the percentage or number of a variable that can help writers break the ice with the readers. Whether they are looking to emphasize the importance of the solution or the urgency of the problem, anything can be covered in this method. Since it quantifies things, it is more potent than texts.

With A Bold Statement

A bold statement or a claim can get the reader’s attention from everything else. Many writers resort to bold or shocking statements while opening an argumentative essay. They may seem outrageous at first but they all come around after connecting the opening with the main premise of the essay. This requires extreme writing and editing skills.

At an advanced level, writers need to deal with more complex arguments. These require better argumentative structure and formatting as well as a clear focus on the problem. In this section, we will take a look at three approaches that are used by professionals to form and strengthen an argument.
Classical Approach
Also called the Aristotelian approach, this is the simplest and most commonly used method to develop an argument. It follows a straight path and can be dubbed as the extension of the five-part argumentative essay. The elements it relies on to prove a point includes credibility (ethos), emotions (pathos), and reasoning (logos). The path to developing an argument is completely logical and straight.
Rogerian Approach
The Rogerian approach is middle-ground as it offers both sides of an argument as valid and reaching. It is respectful to the opponent with no room for confrontation at all. The pathway of this approach starts with introducing the problem, explaining the opposing perspective, explaining your perspective, and then presenting both sides to connect the middle ground.
Toulmin Approach
Toulmin is different from other approaches as it is used when either the main argument is a counterargument to some or not decided on the truth at all. It is also clear from the beginning of this method that it was developed to analyze other arguments and essays. That’s why it is also widely used in refuting arguments or rebutting claims from other writers.

What is the ideal way to open an argumentative essay?

The best way to start an argumentative essay is to grab the readers’ attention. This can be done by using an elaborate hook. A hook can be a literary device that can connect the opening with the main problem of the essay.

Can I use a quote or a question at the beginning of the essay?

Of course. A quote or a question is a great way to open an essay. It helps readers familiarize themselves with the main problem and ensure that the context is masterfully bridged with the main body and the thesis of the essay.

What is meant by a strong sentence starter?

A strong sentence starter is a forceful display of authority by the writer. This can be achieved by putting down a bold claim or statement. A statistic with a harrowing approach can also be used in this setting.

How can I write a strong argument in my essay?

There are three major approaches to developing an argument that we have discussed in the essay. An argumentative essay is as good as the argument it is based on. So, no matter which approaches you are following, they should resonate with logic and reasoning.

What is a good example of a strong argument?

According to the Aristotelian or classical approach, a strong argument covers the following aspects:

How can I balance different sections in an argumentative essay?

An argumentative essay is composed of different sections. An ideal essay covers all the sections and then balances one another in such a way that they support the thesis and the topic without going overboard.

A Solid Start For A Quality Argumentative Essay

Even at the point of being a cliche, it is true that the first impression of writing or a person is the last or the ultimate impression. Through a solid opening, writers can strengthen their hegemony in the minds of the readers. How to write or structure an argumentative essay is a valid concern for students and novice writers. In this resource, we have covered the bases across, from the definition of an argumentative essay to how to develop arguments and balance the major parts.

We hope that writers will find it useful in their pursuit to start and close quality argumentative essays.

Citations
for $3.09
Superb Formatting
for $2.50
In-Depth Research
for $3.99
Plagiarism Report
for $3.50
Your Custom Argumentative Essay!