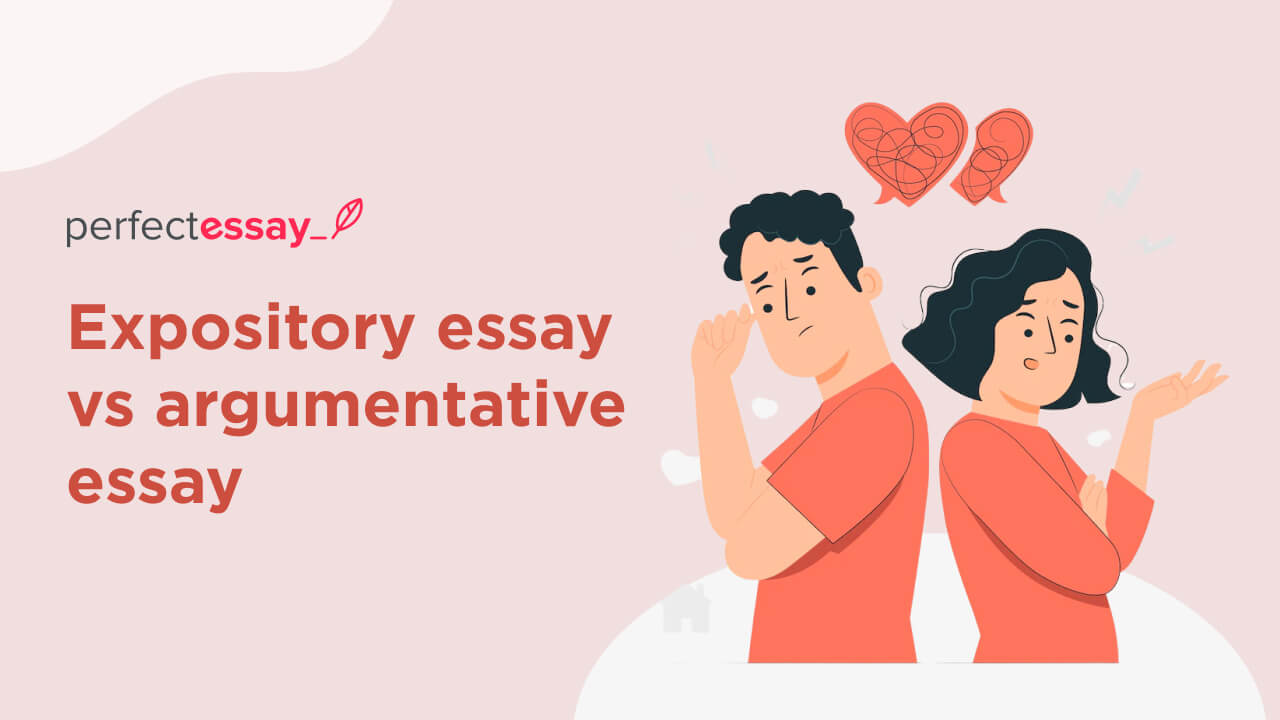 The change in approach transcends the premise and is incorporated in the major sections and elements of the respective essays. This resource aims to help students understand the differences at both theoretical levels. This will help you in translating your knowledge into exceptional essays without spending too much time with unknown variables.

We will cover each essay type in depth, one by one, and then share some common tips to write excellent argumentative and expository essays.

It is not hard to define expository essays now that we have set the tone in the opening. For the uninitiated, an expository essay is about conveying factual information to the readers without being opinionated and suggestive. This is one of the hallmarks of these types of essays. They follow a clear structure and formatting so that readers can understand the arguments and the supporting evidence following them.
Based on the topic demands and scope, there are many types of expository essays. The most common ones include classification essays, definition essays, process essays, compare and contrast essays, and so on.
Writers use the main body section to provide actionable information to the readers so that they can reach a predictable conclusion in real life. That’s why newspaper stories, how-to articles, and manuals are written in expository format.

To better understand the nature of expository essays in a vacuum and concerning argumentative essays, we will take a look at some of their characteristics. Students should keep in mind that this is what makes the whole difference. If an expository essay is missing a crucial element, it can be anything but an expository essay.

With that thought in mind, let us dive into this.

Objective Approach Toward The Subject

One of the major hallmarks of expository essays is their inherent objectivity toward the subject matter. Where narrative essays can be extremely subjective, to a point of unreliability, and descriptive essays can be over the top, expository essays treat the subject with utmost objectivity. That’s why the information is always crisp and the points raised by the authors are backed by references from credible sources. For instance, if the topic is about different types of CPUs, the author would not care about his preferences and inclinations but keep the contents of the essay to facts only.

Not only the language but the intent behind those words is reflected through the language. In the case of expository essays, the writers can’t provide suggestions, comments, and opinions in a biased tone and voice. When we compare this with other essay types, including argumentative essays, they can be charged and lean toward personal likes and dislikes.

That’s why students cannot use any suggestive comments in an expository essay because it will not help the case and turn the essay into something else. An unbiased voice and tone is the key to acing expository essays and adding a command to the actionable contents.

Narrative essays can have details and riddles for the readers to solve to understand the key message. Similarly, descriptive essay writers can dabble in flowery prose and leave the readers with enough to figure out on their own. This is not the case with expository essays. The bulk of the essay is its main body. That section of expository essays is dedicated to providing factual information that readers can rely on. Everything is backed by empirical evidence, such as references and citations from credible sources. That’s why newspaper stories, manuals, and how-to articles follow the expository format.

This is another hallmark of expository essays that helps them stand out from the rest of the types. There is room for chaos and disorganization in essays like narrative and descriptive because it can add to the character and potency of the story. But it is not acceptable in expository writing. Whatever structure a writer deems fit, there should be one.

The most common is a chain structure where each argument or reason is followed by evidence or effect. But writers can also use the block method where they list all the reasons in one go and then explore their effects separately.

Argumentative essays, also called persuasive essays, can be the true antithesis of expository essays when it comes to a writer’s stance and arguments. One of the major differences between the two types of essays is their approach toward the subject, as discussed in the opening paragraph.

Persuasive essays are supposed to be charged with emotions and personal biases. But it is upon writers to provide the necessary evidence to back up their claims. The purpose behind writing argumentative essays is to convince or persuade the readers, hence the name persuasive essays.

These essays also follow the structure but it is less brittle and more flexible compared to expository essays. It also follows a single argument throughout the essay and provides the necessary evidence to back up the claims.

Argumentative essays are among the common types of essays that are written by students in schools and colleges. Instructors gauge their research, writing, and thinking abilities by providing them with topics that require opinion-making.

Writers need to take a stance early on and show the readers their take. In the main body, it is necessary to cover the arguments with quotes and references from reliable texts and personnel.

The characteristics of argumentative essays are discussed in the section below.

This is the thing that makes or breaks an essay for the readers since the biases and personal likes and dislikes are commanding everything else. The writer is tasked to state his personal opinions and beliefs academically. Then, these should be backed up by evidential support so that readers can make up their minds about whether they want to accept the argument or reject it. Whatever the result, the writer has to provide the basis for the claims.

Argumentative essays are called persuasive essays for a reason. The language of these essays differs from expository essays on many levels. Where objectivity and unbiased tone are the currency in expository essays, writers need to suggest and comment on developments to help readers see their side. Also, they can employ literary devices and techniques such as similes, metaphors, and so on to make a point for the readers. By keeping the primary purpose in mind, writers can do a lot!

In an expository essay, there is usually more than one argument to make for the writer, and then provide support for each. That is not the case with argumentative essays. Writers pick up an argument and then provide multiple supporting pieces of evidence to get the readers on their sides. To carry a single argument across different sections lines, it is necessary to compose logical and exceptional transitions. These are necessary for other essays too but they play a key role in these essays.

A Clear Thesis Statement In the Opening Paragraph

Since writers are tasked to take a side, it is best to take one as soon as possible. The best way to provide a clear stance to the readers is through a thesis statement. A thesis statement is the essence of the main idea or theme of the essay.

It comes in the introduction, usually in its closing lines to bridge the introduction with the main body. A thesis statement can be the part and parcel of the argumentative essay.

After covering the differences and similarities between argumentative and expository essays, students will be able to pick up the respective essays with ease. But there is a lot of frustration while writing one in schools and colleges. In this section, we are sharing some common practical tips for students that can help them in writing excellent essays without breaking a sweat.
Researching And Outlining Extensively
Narrative and descriptive essays can be written from the sheer power of imagination and memories but that is not the case with argumentative and expository essays. They require extensive research and outlining so that writers can set up a course in the beginning. This will help them with the conclusion and how all things unfold in the meantime. There is no foul in writing intuitively but it can lead to frustration and writer’s block.
Understanding The Purpose of Each Section
The whole becomes greater than the sum of its parts when each part is true to its purpose. Argumentative and expository essays share the same structure, so the aim for each section in these essays is well-defined according to the topic and the type of the essay. So, the introduction is there to introduce and provide context to the thesis statement. The main body covers the main arguments and their pieces of evidence. The conclusion concludes the whole essay.
Proofreading And Editing Meticulously
Many students believe that their work is finished the moment they complete the initial write-up. This is not true because it will have a lot of errors and inconsistencies, including grammatical, contextual, and syntactical. It is the writer’s job to edit and proofread extensively and ensure that the final copy is free of all errors. They can use automated tools to make this process quick and efficient. Whatever way they want to pursue this part, the end product should be error-free.

What are the differences between argumentative and persuasive essays?

Argumentative and persuasive essays are different names of the same type of essay. These essays are about taking a stance and then providing the necessary evidence to make them stick in readers’ minds.

Can I use sentimental language and approach in an argumentative essay?

Yes, you can. Argumentative essays are about persuading readers and making them see the side of the author. If this takes charged language and biased tone and voice, then writers can employ them for their benefit.

What is the major difference between argumentative and expository essays?

How do different sections work in expository essay writing?

Expository essay writing is about providing factual information. The introduction opens the essay with a hook and provides some context to lead to the thesis statement. The main body takes care of the crucial information through arguments, postulates, and pieces of evidence. The conclusion sums up the discussion without adding to the main points.

Do I have to carry a single argument through the whole argumentative essay?

When it comes to argumentative essays, that is the norm in most cases. The topics for these essays usually distill the whole discussion into one stance. Writers go in favor or against it and then provide evidential information to make it understandable.

What are the distinguishing traits of expository essay writing?

The following are the hallmarks of expository essay writing:

The different types of essays can be confusing for writers who do not have enough experience in writing and understanding them. Argumentative essays are about taking a stance and then providing arguments and evidence for the stance. In expository essays, writers need to provide factual information based on references and citations from credible sources.

This blog has covered the definitions and characteristics of the two types of essays. We have also shared some practical tips that can help writers compose exceptional essays without spending too much time and effort.

If students are having a hard time with argumentative and expository essays, whether understanding or writing one or the other, this is the place to get a resolution!

Perks Bundled With Your Essay