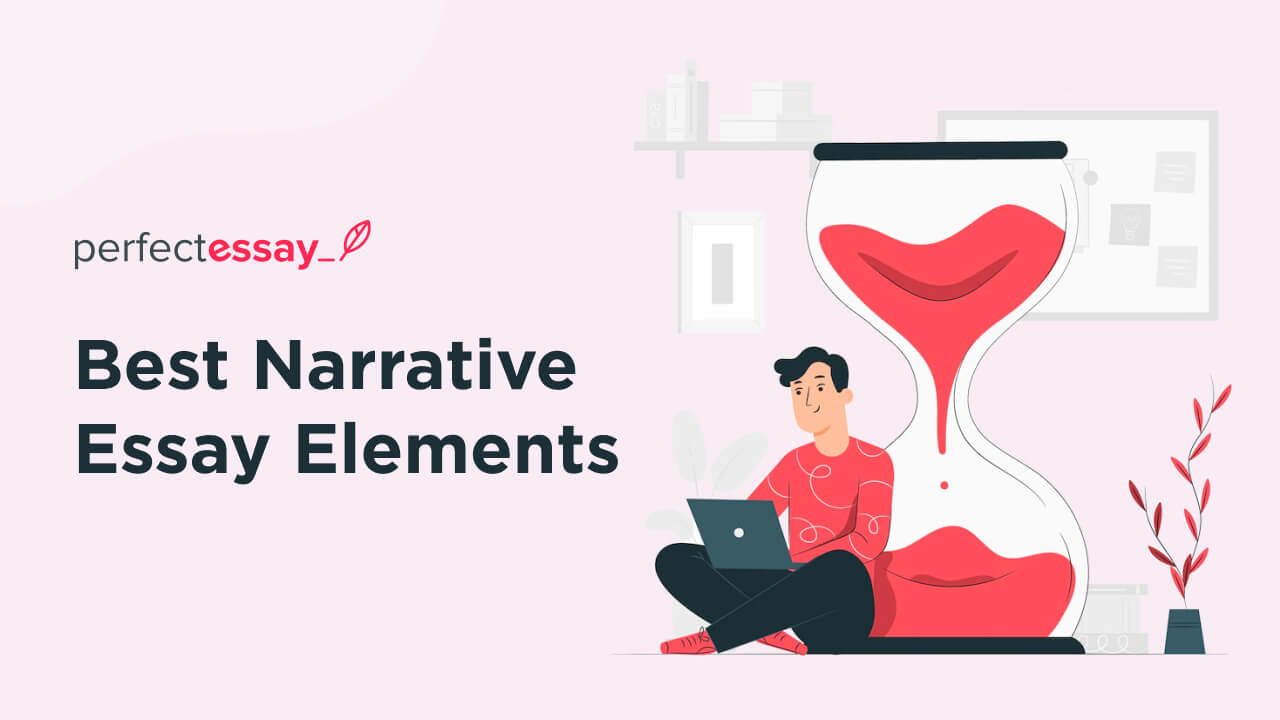 The majority of academic writing is about empirical writing based on facts and figures, such as theses, dissertations, term papers, etc. There is no room for showing emotions or highlighting personal style that can become a signature for the writer.

On the other side, narrative writing is about writing an essay based on personal experience or incident. Since it is based on something truly personal or subjective, many writers believe that they are at complete liberty to treat the elements as they please.

This could not be farther from the truth because the elements are defined and baked in the ecosystem.

Before a writer starts to learn and master the elements of narrative writing, it is necessary to understand the importance of a topic. A topic or a title is the first introduction or the first pitch of writers to the readers. Even those who do not have the time to read a narrative are sure to read the title. If they are motivated enough by the title, it is a job well done by the writer.

That’s why coming up with a perfect topic is a necessary task that cannot be shirked. The idea here is to reveal the story just enough that it piques the interest of the reader.

It foreshadows the events of the narrative for readers or intensifies the suspense using different literary devices. A thesis statement is an essential element of a narrative essay and one cannot exist without it.

Narrative Writing Styles For Every Essay

Since the writing itself is subjective and there are more than one ways to approach a narrative, you can always find writers treating a single premise with different writing styles. Some employ first person or third person omniscient narrative to tell a story. Modern writers are even experimenting further and some are even using second-person narrative to tell a story while addressing the reader or leading them through the action.

Descriptive narrative is everywhere in narrative writing when a writer describes a person, a place, or an idea. It lends the element of imagery and invokes a sense of a being in readers as they can feel the presence of the thing described in the writing.

That’s why as a reader, you can always invoke the same imagery when you read the passages from your favorite novels or short stories. This writing style relies heavily on the description so dialogues and exposition are hard to find in this instance.

Narrative writing is subjective and readers only get to know the details that a writer wants to share through his writing. In a viewpoint writing style, all the other details are omitted and the narrative is strengthened based only on the revelations. In a sense, it is a subjective or fabricated truth that cannot be disapproved of by readers.

For school and college students, writing a viewpoint narrative essay can be challenging because of its limitations and unreliability.

A linear narrative writing style is the most commonly employed method in essay writing. It follows a simple chronological order to reveal the events that are extremely easy for readers to follow.

The best thing about this style is that it is the easiest and keeps the balance between the causes and effects of the story, so the logical end of the narrative remains intact for the most part.

As far as the purpose of narrative writing is concerned, this style makes it easier for readers to follow and relate to the story.

Opposite to linear narrative writing, non-linear writing is about explaining events that suit the narrative best. Through the application of flashbacks, shifting narrators, and other literary devices, writers can weave a narrative that can be punchier than a linear one but readers would have to be more attentive to different details.

For the students in schools and colleges, it is not recommended to dabble in this style because it is hard and complex to handle compared to the linear style.

In this writing style, the time and space elements of the narrative take a backseat in the favor of the actual action. The premise is simple: the story is all about how the narrator or protagonist achieved something important, either material or psychological.

This style is often found in children’s stories and fables from cultures around the world. It is easier than the non-linear writing style but it does not give much room for details, such as the setting of the story, character development, and so on.

The Essentials of Narrative Essay

Now, let us dissect the essential elements of narrative essays and see why they are so important.

The plot is the flow of action and time concerning the narrative. Writers are divided on its importance but it is a necessary cog in the machinery of narrative writing.

Most plots follow a traditional path that starts with the introduction of the setting and characters, moves through rising action and climax, then falling action, and the ultimate resolution.

People involved in a narrative, either one or many, are considered characters of the story. Characterization is a process through which a writer creates a character, by giving him his abilities, shortcomings, etc.

There are two major types of characters in the narrative:

In these terms, the plot can be defined as how the two change at the end of the narrative.

Setting refers to the time and space of the narrative where it unfolded. For instance, if the narrative is about a patient dying from cancer, then the setting could be a hospital room or a basement in a dusty old house.

In some cases, the setting plays a vital role in the narrative as it symbolizes something more than the face value of a place.

The theme is the central idea or the moral lesson that the writer wants to convey to the readers with the help of all the other elements of the story.

Countless themes have been explored by writers in their stories. For the most part, narratives with the element of tragedy, loss, and suspense bid well as readers can easily connect with the characters in the story.

The point of view of the story is the slit from which readers can peek into the world. This is dependent on the writer and can play a pivotal role in the narrative.

There are three major viewpoints used in narrative writing:

If everything goes well in a story, it is not much of a story or a narrative essay for that matter. Conflict is the disruption of the status quo that presents a challenge to the protagonist.

The nature of the conflict can be diverse, from internal turmoil and struggle to outside factors such as antagonists, nature, and so on.

For instance, in The Metamorphosis by Franz Kafka, the narrator and protagonist of the story woke up and found himself turned into a giant bug.

The ultimate culmination of the conflict is called resolution. It can be a battle against a disease or winning a person over through sheer determination. It does not matter whether the protagonist wins or loses, the resolution leads to lessons learned that are to be shared with the readers.

The resolution is often handled in the conclusion part of the narrative essay.

How To Balance Elements In A Complex Narrative

Learning and identifying elements in a narrative are easy, but it takes a lot of time and effort to implement them in writing. Many students struggle with keeping up the common thread among all the elements.

This section is dedicated to some of the tips that will help writers in balancing and optimize the elements to better convey the story.

Three main viewpoints are used by writers, that are first person, second person, and third person. The latter two are mostly used in fiction writing because writers are more at liberty in these formats.

For narrative essays, the first-person narrative is the best because the kernel of the idea arises from personal experiences. Many students make the mistake of choosing the wrong narrator for the viewpoint of the story and often mess up both limitations and strengths of a viewpoint.

As we mentioned in the earlier sections, the ultimate purpose of writing a narrative essay is to entertain the readers and share with them a piece of personal history.

Whichever element you choose or which variable you want to pull through the playbook should be executed by keeping readers in mind.

A linear story with rich details and imagery and believable characters can easily entice readers into the story.

Having A Tight Grip On The Plot

Students can easily be excused if they can’t get a strong grip on the plot because this is something that established writers often struggle with. The plot is the logical and sequential flow of the narrative that also reveals the causes and effects of actions and incidents.

Teachers at schools and colleges do not expect students to be masters at plotting techniques but they should acknowledge the element and incorporate it into the narrative.

What is an essential element of a good narrative essay?

The narrative itself is extremely essential for the narrative essay. The exceptions can be made for the plot, characters, and even the theme, by not addressing any of the essential elements directly.

How can a writer structure a narrative essay?

What are the 5 basic elements of every narrative essay?

The five essential or fundamental elements of a narrative essay are:

How do you start and finish a narrative like a pro?

The following tips can help students start and finish a good narrative essay:

What is the purpose of writing narrative essays in schools and colleges?

It allows students to dive deeper into their minds and explore events and personal experiences. Then, they can work on them and come up with narratives with clear direction and a relatable message for readers.

Narrative writing depends on its essential elements to send out the intended message. That’s why students need to learn and understand all the elements and practice them to incorporate them into their essays. We have also highlighted some tips on how to balance these elements to get the best of narrative writing.

In addition to this, we have also discussed different writing styles in narrative essays and recommended the easier and most effective ones for the students.

We hope that students will find this post helpful in learning the craft better and faster!