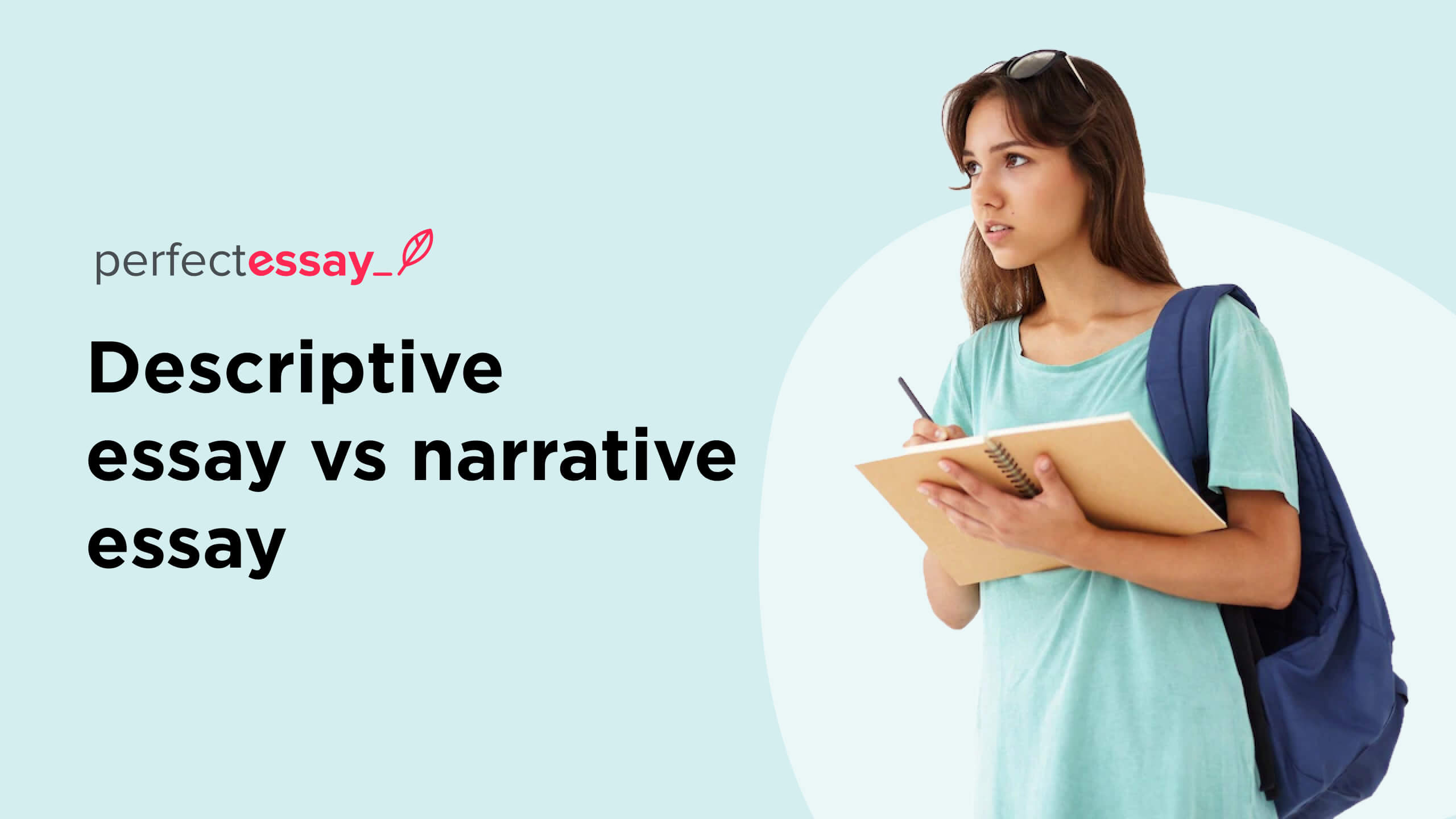 Understanding And Appreciating The Differences

Even before the advent of civilization and modern society, writing existed in a rudimentary form. The major communication channel was the talk but writing took off and started to penetrate the social fabric. In the beginning, it was hard to differentiate between fact and fiction because of a biased approach toward personal history, but human beings, as a specie, learned to keep the differences and appreciate them.

In schools and colleges, students need to write for the most part to learn and show what and how much they learned. In terms of creative writing, essays still reign supreme. There are two major types of essays that are still used by school authorities to gauge the capabilities of students. These are descriptive essays and narrative essays. The focus of this blog is on the similarities and differences between the two.

Narrative writing is one of the most ubiquitous forms of writing. The literal meaning of narrative is a story or an interconnected account of an event. In academics, a narrative essay is a subjective account of a personal experience or incident that changed the course of history for the writer and other characters involved in the process. The major elements of a narrative essay include a well-grounded theme, believable characters, a concrete yet symbolic setting, and a conflict to disrupt the status quo.

A narrative essay is written to make the readers care and entertain so that they can draw parallels from the characters and contents of the narrative essays. Apart from this, narrative essays offer a ripe ground for writers to experiment with language, prose, and its application.

Compared to a narrative essay, a descriptive essay is much more focused and devoid of any deeper meaning. It is defined as a personal account of a person, an object, a place, an event, or an experience. Writers rely on figurative language and sensory details to infuse life and vigor through the subject. Sometimes, the topic for a descriptive essay and a narrative essay can be the same but the contents differ a lot because of the focus on the details.

The purpose of writing a descriptive essay is to make things and people come alive for the readers. It follows a standard essay format with three major sections, comprising different yet complementary information to bridge the gap of space and time for the readers.

This section is dedicated to covering the differences between writing a descriptive essay and a narrative essay. The differences range from the primary motive to literary devices, a range of subjects, and more. Students should keep in mind that the main difference between the two is their treatment and scope related to the given subject, even when a topic or a title is somewhat similar or related.

Readers can draw parallel to the things based on the narration provided by the writer. On the other side, a descriptive essay is written to describe a person, a thing, an event, or a place to the readers through figurative language and sensory details.

Another thing that sets the two types of essays apart is their dependence on literary devices. In a narrative essay, writers do not have any compulsion to rely on these to make a point. Even minimalist, simple prose can do the trick for the writers. We have seen many master storytellers such as Samuel Beckett and Ernest Hemingway who showed the writers that more can be said by saying very little or none at all. The other side of the spectrum does not correspond with that notion. In a descriptive essay, a writer has to rely on literary devices such as similes, metaphors, analogies, and more to make a point.

The range of subjects is another aspect where the two diverge, to some extent. A narrative essay is a personal account of an incident or happening that was influential in its content and character, for both the writer and the readers. It does not revolve around a specific subject, but rather a story that leads to the conflict and then moves through it. A descriptive essay, however, focuses on the physical and metaphysical aspects of a subject under consideration. It can be a person, a thing, a place, or an event that was special for the writer. In any case, the scope and treatment of the subject can make or break the deal for both types of essays.

The elements of an essay are the fundamentals that are necessary for their existence. A narrative essay has around five elements without which one cannot exist. These include a theme, a thesis statement, characters, a setting, and a conflict. For a descriptive essay, it is necessary to have vivid details, figurative language, sensory details, and a rigid structure and organization of the content to be qualified as such. The job of a writer is to balance all these elements for the benefit of the story or the description. He should play the cards right in terms of connecting the readers with the content. If this is not true, the essay is lacking in many aspects.

In addition to understanding the similarities and differences between the two different types of essays, it is necessary to have a look at some of the tips and tricks. They can help students tackle different issues related to different elements and their manifestations in the content.

This section is dedicated to helping novice writers with the mechanics of writing and connecting the story or description with the readers.

Clarity of Prose And Purpose

Writing requires precision and focus to provide the exact meaning to the readers. Whether you are writing a descriptive essay or dabbling into the vocation of writing a narrative essay, it is best to understand that readers find pretentious details hard to understand and remember. No matter what your writing style is, it is best to strive for clear prose with simple sentence structure. Whenever in doubt, always err for short sentences and paragraphs. This also helps in providing a single purpose to the prose which is the part and parcel of writing an essay in the first place.

Masterful Use of Language

For a writer, the command and use of language are everything. It is as much a science as it is an art. While writing an essay, a writer should be mindful of the need for the level and depth of language. Many make the mistake of using dense and heavy words thinking they would enrich the prose. On the contrary, it can put readers off the course because they make it hard to read and not much pleasant to recite. So, masterful use of language and reliance on literary devices and moments, such as minimalism, alliterations, and more can bear exceptional fruit for the end product.

This adage has been used by many experts to help novice writers understand the importance of getting readers into the scene, instead of describing the scene to them. While writing an essay, you will be entrusted to provide the necessary context and details. Instead of merely stating them, you can get the reader invested in them by helping them understand and visualize the scene better. This “show, don’t tell” philosophy is at the heart of both narrative and descriptive essay writing, especially for the latter, because without it, the purpose of writing falls flat. So, the prose should be enriching and enticing in every major section of the essay.

What is an essay?

In simple terms, an essay is a focused piece of writing that either explains, argues, describes, or narrates. Depending on the subject matter and topic of the essay, students need to write an essay focusing on one of the aspects. The common elements of an essay, of any kind, include a theme, a thesis statement, a setting, and an agent of change.

Why should I start an essay with a hook?

A hook is a literary device that writers employ to lure the readers into reading an essay and get them invested in the story. There are many ways a hook manifests itself, such as through a direct question, a bold statement, or a statistic that connects directly with the content of the essay. Without a working hook, it often becomes harder for readers to get past the title or the introduction.

What are the major sections in a standard essay?

There are three major sections in a standard essay, whether it is a narrative essay or a descriptive essay:

Is an essay complete without a thesis statement?

A thesis statement is a distilled version of the main theme or the idea of an essay. It covers the dynamics of topics in a single or a couple of bold sentences. The ideal place for a thesis statement is at the end of the introduction where it can transition into the main body and foreshadows the upcoming content.

What is the most common type of essay in universities?

Argumentative essays are considered to be the most common types of essays that are written in universities. In these essays, writers need to make a stance in a debate, either for or against the statement. Still, narrative and descriptive essays are also common in schools and colleges to gauge the writing and thinking capabilities of the students.

Why are research and outline important before getting started?

Having a working outline after research and gathering the necessary information is necessary to prevent bottlenecks and writer’s block along the way. It keeps the content focused and helps writers keep the destination in mind, even after numerous detours. That’s why many experts suggest outlining to be the proper first step in writing an essay.

Even though there are many similarities between narrative and descriptive essays, they are different in their form, scope, and reach. Where one is about describing a subject under consideration, the other one is about telling a story leading to a certain point and beyond.

In this post, we have covered the major differences between a descriptive essay and a narrative essay, thus providing the launch pad for students to write great essays in both categories. Apart from the content provided in this post, we urge students to study literary figures and try to emulate their style in their prose. Ultimately, it will become easier to create worlds and people in them through the power of description and narration.

Perks Bundled With Your Order