How to Write A Reflective Narrative Essay 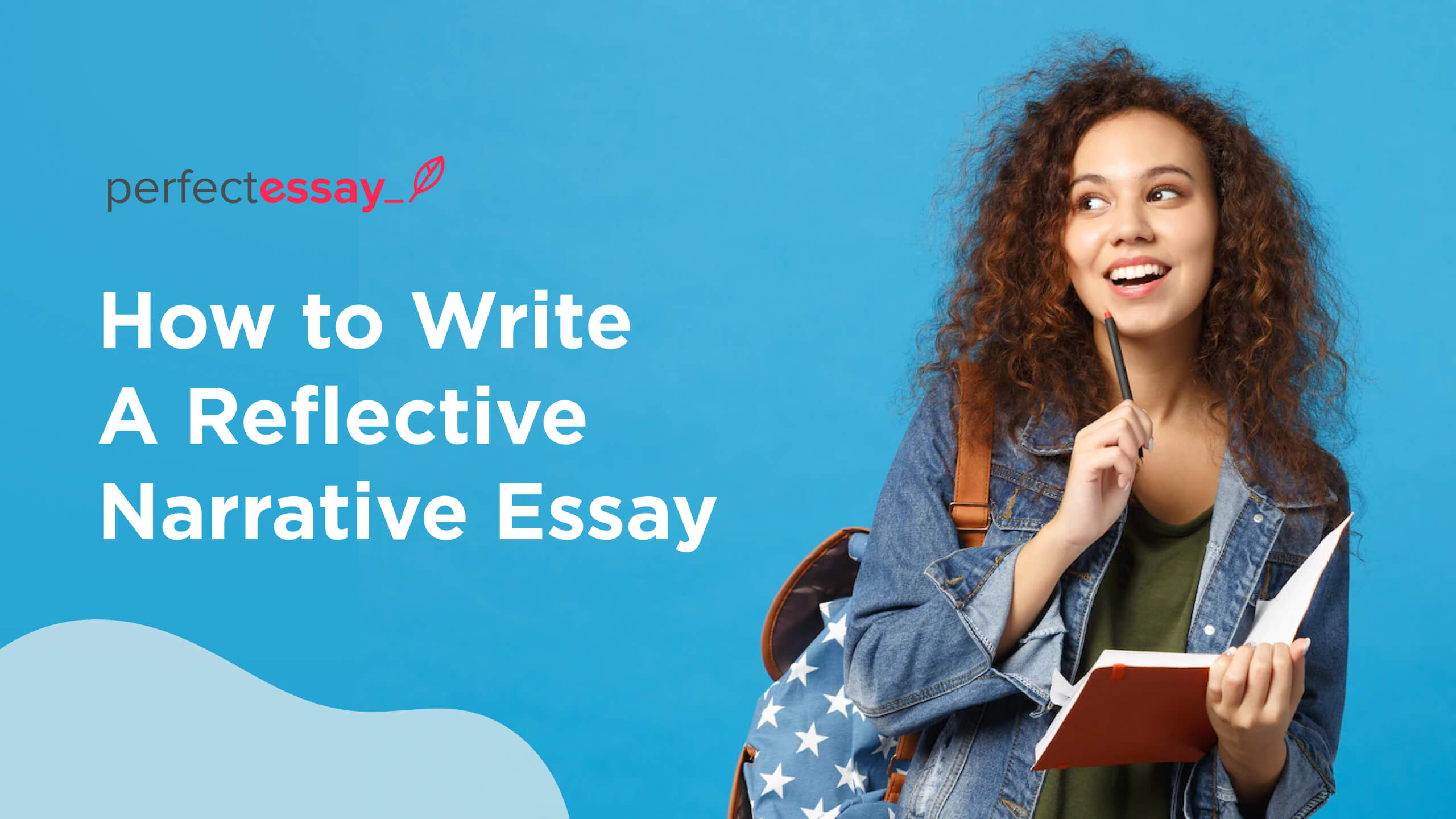 Writing, as self-expression, is a potent medium. Through the millennia, people have expressed their thoughts and recounted their actions in the forms of journals and diaries and left them for the progeny. Fiction was always there, in almost every culture, in one form or another. But its development in the last millennia and then immortalization through cinema and TV has solidified its position in the canon of literature and arts.

With all of these monumental developments happening around, essay writing has not eclipsed yet. In all its types and forms, essay writing offers both seasoned and novice writers the liberty to explore and ponder through the inner depths of their minds to the skies.

What Is A Reflective Essay?

As the term indicates, a reflective essay is about a writer’s analysis of an incident or an accident that happened in the past. In most cases, writing a reflective essay is about something that the writer endured and learned valuable lessons from. But it could also be a tragedy or development in society that affected people’s ways of thinking and, ultimately, living.

We can always find many examples of reflective essays in literature and history. Mostly autobiographies written in the later parts of the authors’ lives provide sufficient fodder for reflection. As they recount the incidents and experiences from their youth, they enrich the writing with the lessons learned and the opportunities missed that the readers can easily relate to.

Prime examples of reflective writing can be found in the writings of world leaders and other influential persons such as Nelson Mandela, Benjamin Franklin, and many more.

On the outlook, the process of writing a reflective narrative essay may seem extremely simple. It is child’s play for novice writers or students in schools and colleges until their teachers assign them one.

The sheer straightforwardness lends a lot of complexities and issues to this narrative. Since it is extremely subjective, writers believe that they can go about writing anything and it will somehow make sense in the end.

In reality, a standard structure provides clarity and focus to both writers and readers. The former can chalk out a solid path with planning while the latter can understand the story better if they face a similar pattern in the organization of writing and thoughts.

Deciding on a perfect topic for a personal reflective essay takes a lot of effort, but it is all worth it in the end. In most cases, teachers assign a topic to students in schools and colleges. While they are given a topic, they need to come up with a working title and develop a thesis statement that is reflective of the title and overall topic.

As the formative steps in the process, writers should take care of every aspect because it will set their pace and direction for the rest.

A winning topic should be the central idea or thesis statement of the essay. It should entice readers to take a look at the essay but should not reveal much.

To get a better understanding of choosing the right topic, students should study works done by writers in the past.

Setting out to write without due research and gathering materials can lead to disasters. Many students make the mistake of commencing the reflective narrative essay by working out a mental map. They think for a couple of minutes and then believe that the narrative will flow from their fingers and onto the keyboard.

Experts have suggested that the best way to tackle a reflective narrative is by planning beforehand and then organizing the findings into a cohesive manner.

This way, they can see the story through and can balance all the elements of the essay with full confidence. It is because in many cases, writers could not even fathom the extent of elements and failed to capitalize on them. The result comes with a narrative that is lacking in almost every aspect.

Writing the first draft after picking the right topic and conducting due research is easy. Those who dread to sit down and write it because they believe it will have many errors and inconsistencies are right partially.

Seasoned writers believe that first drafts should not take a lot of time. Writers should blaze through them and finish them as soon as possible.

There will be errors and mistakes but they can be rectified later on. But if they delay the first draft, they often lose their grip and focus on the narrative because writers are not in the original space for long.

For the 1500-word essay, it is best to finish the first draft in two to three sessions and then leave the draft for some days.

This is the most crucial phase in the process of writing a reflective narrative essay. The results of the research and the first draft all come to fruition in this step.

There are many ways to go through proofreading and editing. The most effective one is to identify items and elements of the essay and then work on each one of them for the run. For instance, writers should analyze the whole content and try to find grammatical and spelling mistakes in the text, while ignoring everything else. In the next step, they can work on the theme or central idea of the reflective narrative.

In the end, they will find that everything is in its place because the repetitive phases of editing balance everything against each other.

As individuals go through life, they experience certain events and incidents. The phases of life are often similar for a majority of people. For instance, things start from early childhood, and a bigger change comes from going to school. There, we see new people and get friends and foes who influence our thinking and worldview, in some cases for the rest of our lives.

Because of the impressionable age and formative phase of our lives, school and college are where we make memories for the later age. After that phase comes the practicality and often harsh realities of life. People get heartbroken because they face challenges in hurdles in achieving their dreams. Many abandon the pursuit of excellence and settle for mediocrity.

Then, after going through the good, the bad, and the ugly things in life, we reflect!

Similar to the purpose of writing a narrative essay, the rationale behind composing a riveting reflective narrative essay is to tell the readers who the writer is, the circumstances he went through, and what he learned from those.

Since we have already established the nature and structure of a reflective narrative essay, students should find it easier to approach, no matter the topic given to them by their teachers. In case they are not given one, they will have to come up with a topic and write an essay on it. Every reflective paragraph example extracts life from change and incidents. If life goes on without any unexpected incident, it would become bland. The same is true about reflective narrative. So, here is how to write a reflection paper example that writers can base their stories on and connect with a wider audience.
Meeting A Person
In life, we meet new people almost every day. Some leave a more lasting mark that cannot be shed throughout our lives. These people shape our narrative and the whole story can be explored in the essay. Many students meet friends in schools and colleges that last a lifetime and affect almost every aspect. By reflecting on the changes brought about by the influence of that new person, we can come up with insights that can help us find deeper meanings.
Experiencing Loss And Grief
If there is one thing that does not change in this life, it is the change itself. We can also put it in the words of Samuel Beckett that since we are on earth, there is no cure for our existence. The point is that people are going to face loss and the following grief. It can make or break a person, depending on each person’s capacity. But one thing is sure, it influences how people think and live.
Visiting A Place
Writing a reflective narrative essay based on an incident of loss and grief is a recurring theme in many literary works. We all can understand the potency of loss and tragedy that people endure in the face of someone either leaving or dying. In the same manner, visiting a place can introduce a series of changes in people resulting in drastic character development. Later, they can reflect on it using different literary devices.

What is the format of a reflective essay?

A reflective narrative essay follows the same structure as that of a narrative essay or a descriptive essay. It has a clear beginning, called an introduction or opening where a writer sets the stage and foreshadows events through a thesis statement. Then comes an all-explaining body where all the other elements of the essay come into play. In the end, the conclusion summarizes the whole discourse with takeaways.

How can I master the opening of the reflective narrative essay?

The introduction or opening of a reflective narrative essay should be punchy and thought-provoking. Many writers start with a bold statement or a question for readers. Later in the body and conclusion, they answer that question that also aligns with the title and thesis statement of the essay.

What are reflective narrative essay examples?

Reflection essays are written to reflect on personal incidents and events that people face in their pasts. The purpose of this practice is to understand the causes and effects of the changes and incidents and draw valuable lessons from them.

Do you write in the first person in a reflective essay?

Yes, this is the preferred method by writers to write a reflective essay because it shows a sense of ownership. Also, it helps readers better understand and see the things from writer’s point of view.

What are the three basic parts of a reflection paper?

The three basic parts or elements of a reflection paper are as follows:

In these sections, writers balance out the theme, setting, conflict, and characters for the added effect.

What is the ideal word count for a reflective essay?

There is no set word count for a reflective narrative form writing. In most schools and colleges, the word count is around 300 to 400 words, but it can vary based on the topic and writing style. Since the composition of the essay is about what happened and what the writer learned from that incident or accident, it should have both subjective and objective elements.

In-Depth Research
for $3.99
Plagiarism Report
for $2.99
Writer Consultation
for $2.50
Proofreading
for $3.50
Get Reflective Essay Now!