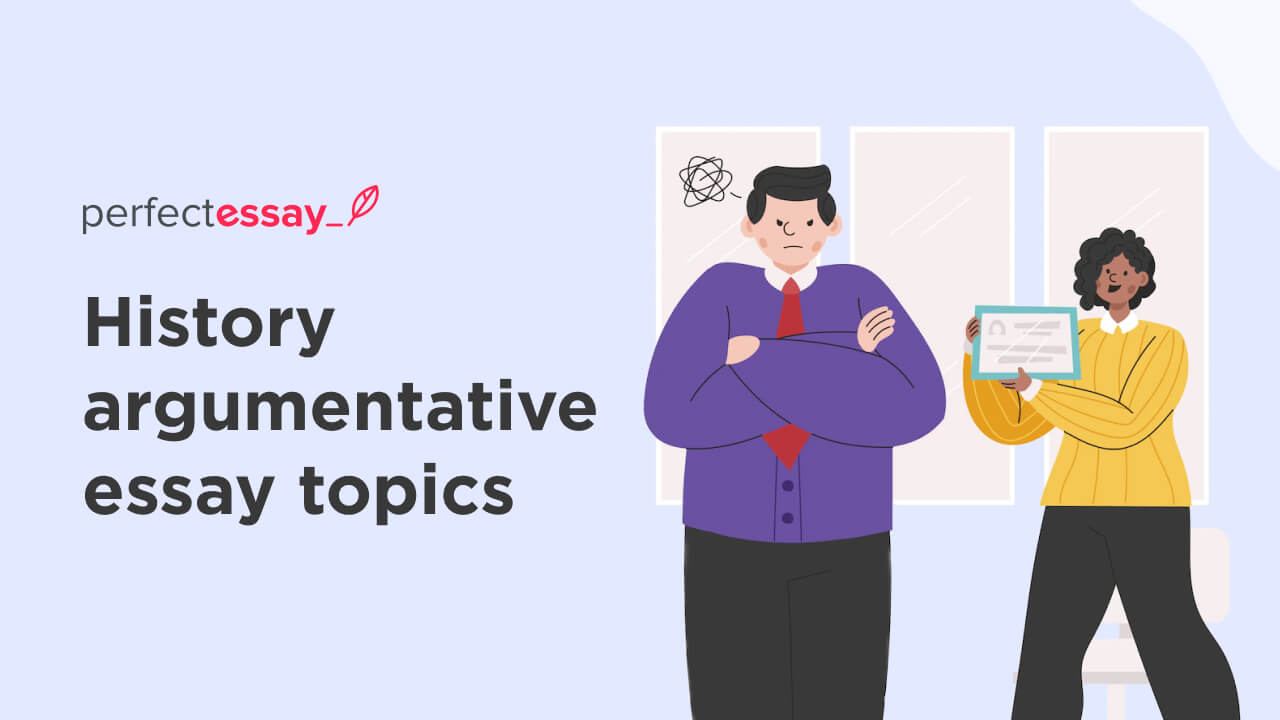 History baffles even the most seasoned academics. There is so much information that must be memorized and then analyzed to find relevant truths and facts. While writing an argumentative essay, is different than merely reading a history book or connecting the dots in an expository essay.

Ideas and questions for an argumentative essay need to be drawn carefully and then credible sources should be scoured to ensure only the facts and figures end up on paper. This is ideal for writing argumentative essays concerning historical issues and developments. But before researching and writing, it is necessary to pick a topic that transcends common bounds.

An argumentative essay is subjective in the writer’s approach but that approach should be proved through evidence from reliable sources. This is what makes argumentative essay writing different from others. It has structured information covered in major sections along with an unbiased tone and voice.

The primary motive for writing an argumentative essay on a historical issue is to convince the readers about a certain viewpoint. For instance, if readers thought A to be a common reason for a conflict, then a writer can provide evidence to the reader to prove B was the real culprit.

There is more than one single type of argumentative essay which we will cover in the closing chapters of the blog.

When students or writers pick a topic to write in a historical argumentative essay, there are challenges and issues that they face with these topics. History is a difficult subject with many technicalities and pitfalls.

In this section, we will cover the most common challenges that students while choosing a topic or writing an argumentative history essay.

While studying the causality and inevitability of the events that happened in the past, we rarely cover the whole picture of the issue. This is a big understatement since we need to take into account all the underlying issues and their effects. The speculative nature of historical learning allows for connecting the dots where they never existed and coming up with lessons for all readers.

Historical argumentative essays are not about listing all the events and their succeeding developments. Many volumes can do that by chronologically listing all the events of history. This is counterproductive for an analytical paper. The job of a writer is to connect the dots for the causes and effects of the event or the subject under consideration.

Just like avoiding useless listing and chronological tables, it is necessary to find significance in what is left in your sources to write the essay. To do that, the first step is cluttering the research table. Then, omit everything that can be omitted and take things that can stand the trials of expounding, argumentation, and evidential information. Everything else will find a better place somewhere.

Both historical figures and events are considered to be either “good” or “bad”. This is a limited and misleading view of things that can be more than what they are perceived. That’s the reason students should avoid ambiguous words and phrases in their essays because they not only mislead the readers but also make their writing weak. Always aim for dynamic vocabulary.

History is not something that must be read and memorized like scriptures. It is to be learned and understood so that the issues of the past can be identified today and their harmful effects can be materialized. In this type of argumentative essay, you need to cover all the relevant bases to ensure your conclusion coincides with the academic truth.

War is the behemoth that is haunting the human past and future. We have been studying it for a long time in our academic discourses but we have not found a formula or an antidote to its onslaught. While writing an argumentative essay on historical issues, war is a supreme topic of interest with much room for original thought and learning.

There are two modes of change in our societies. One is an evolution where a change or development takes place gradually. The other one is revolution. This is what happens when evolution takes a back seat and people want to change things overnight. The revolutions used to be bloody and chaotic to bring about political or social change.

Individuals shape the course of history more than we like to think. Behind every war or social revolution is an individual with a plan or a lack of one. This is where the historical argumentative essay comes into the picture. In this section, we have covered some of the best topics for your school or college essays.

This section is dedicated to helping students with identifying and mastering the art and science behind different types of these essays.

As the name indicates, persuasive essays present both sides of an argument and then try to convince the readers that one side of the argument is better or more sound than the other. The author should present his stance clearly and ensure that arguments and evidence are followed through. In addition to this, writers should refute other views to add value to their values and points of view.

Research papers rely on academic sources and citations to make and strengthen an argument. As the name suggests, this type of argumentative essay cover topics of a wide variety including politics, war, social issues, and so on. The arguments will cover both sides of the argument to ensure that everything is clear for the readers. It is also about not siding with any argument and presenting the proof as objectively as possible.

Analysis essays are about analyzing the arguments of other writers. While doing so, writers dissect every aspect of the essay to make sure that the argument it wanted to pursue was well-founded. In addition to this, writers also judge the elements of clarity, persuasiveness, organization of information, and so on. Apart from all the objective ends, writers should make it clear the side they are on, whether they are supporting or opposing the thesis.

What are some of the best historical argumentative topics?

The best historical arguments cover the depth and scope of the issue. They are introspective without sacrificing cause for effect. In studying history and its issues, there is no better way to learn and analyze than through argumentative essays.

Can you provide an example of a historical argument?

A historical argument usually questions the scope and reach of a reason or cause that led to a major development. In that way, here is an example of a historical argument. “Homer is the father of ancient art of studying history through Egyptian studies.”

What is the significance of historical issues?

History defines our past and dictates our future. The foundations of things laid down in our yesterday come to haunt us tomorrow. In this stance, it is necessary to critically learn and examine things from a historical point of view. The lessons should be learned and applied with a clear focus in mind.

How to compose a historical argument thesis?

A thesis is the summation of the main idea or theme of an essay. It distills the idea into a single or a couple of sentences that can provide the stance of the writer. Writers also use it to open an essay or to bridge the introduction section with the main body.

Is it possible that all historical essays are argumentative?

It is not possible because what makes an argumentative essay is its reliance on a single, well-founded argument. The writers explain and prove this argument through evidential information from multiple credible sources.

How long should an ideal historical argumentative essay be?

There is no ideal length for any argumentative essay unless its scope and thesis are defined exceptionally in the end. Still, the word count for essays is often set in schools and colleges because teachers need to gauge the research and writing chops of the writers. In that sense, an argumentative essay should not be less than 1200 words.

Historical essays are hard to tackle because students need to analyze things from a historical setting without deviating from the set path. The vastness of the subject and the differing points of view are also some of the things that can make an issue for the writers. In this blog post, we have covered different topic ideas for historical argumentative essays, including war, politics, history, and so on.

So, if you need to write an essay on a topic related to history, this will be a definitive guide for you!